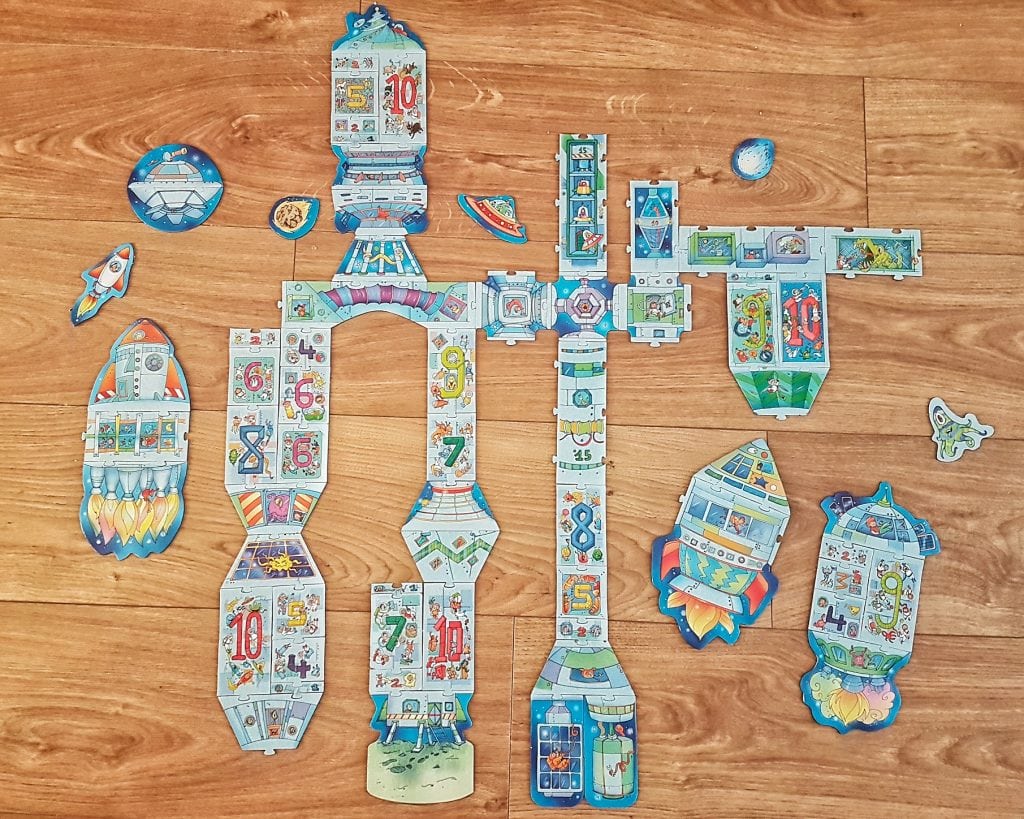 The HappyCalc Elementary Maths Puzzle from FunComet has a really imaginative and innovative design. Unlike traditional puzzles, where there is a fixed picture, children can construct their own mammoth space station, in hundreds of combinations, with no set pattern or size.

And, unlike some educational toys, the maths is absorbed almost as a secondary consequence of building something creative and enjoying imaginative play.

The puzzle consists of hundreds of combinations of space station and rocket parts – complete with comets, aliens and other cute and amusing cartoon quirks. In addition to the ship pieces, however, there are also number combinations, with pieces of different sizes relating to the numbers they depict. These pieces can be placed, in varying combinations,in between spaceship parts in order to create ‘sums’ where both sides have to match in size and number. 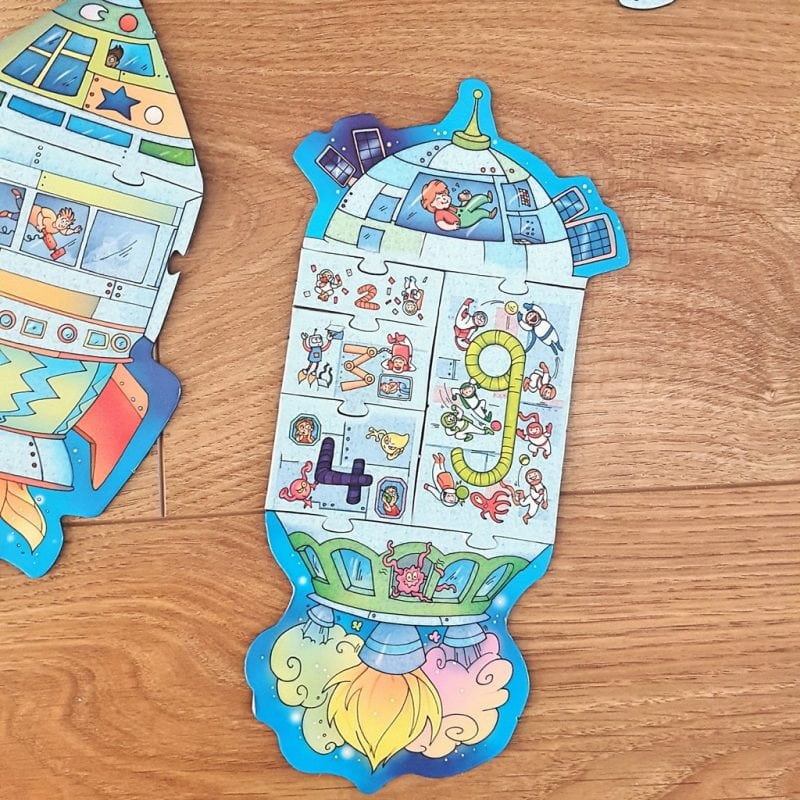 Biggest was very excited by the puzzle, right from the off. He is particularly interested by space at the moment and the colourful spaceship parts and aliens definitely captured his imagination. He wanted to get all the pieces out and look and all the different shapes. He knows his numbers fairly well and was able to recognise and find the numbers needed to complete the sums with a little prompting. However, he was a little more interested in building a spaceship and a little less interested in completing too many sums in a row! 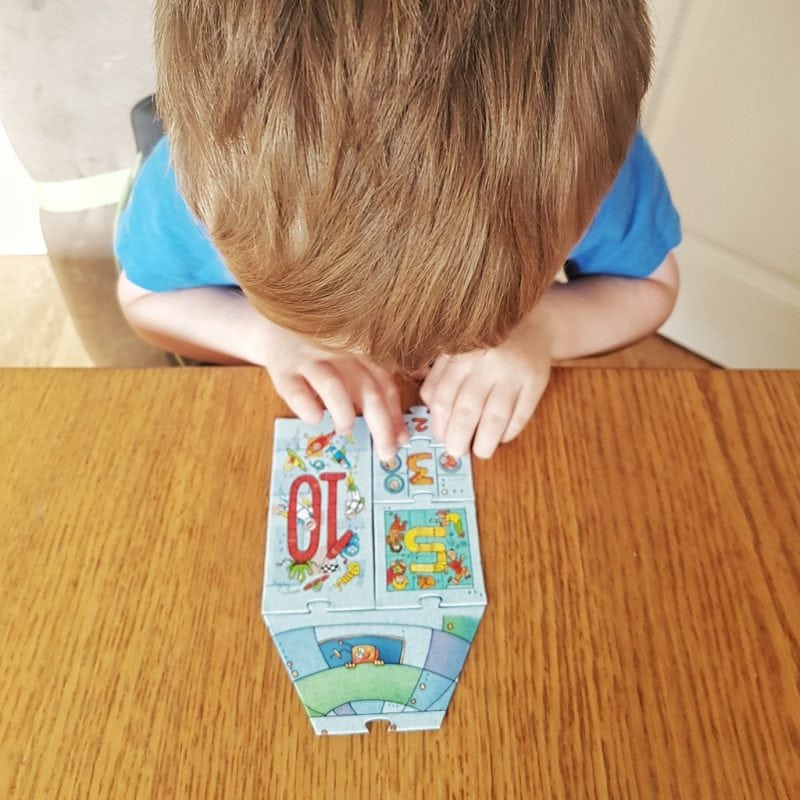 He was happy to find numbers and sums for perhaps ten to fifteen minutes but after that his attention wandered and he wanted to just connect the parts of the spaceship. This is something that I will definitely hold onto and bring out frequently – I think in a year or two Biggest would get even more out of playing with this puzzle.

Never the less, the Elementary Maths Puzzle is an excellent resource. It opens up a world of possibilities for adding to it every day. I can also see several ways that it could be used in classroom; there could be a class space station table where pupils are allowed to go and add a sum and expand the class space station every day.

In addition to this, whereas puzzles can often be a solitary and passive pastime, this game has great potential to be played in groups or pairs, developing teamwork. One person can easily create a ship with a sum that needs to be completed by their partner. Several people could also collaborate on building a space station together, making sure they communicate in order to ensure both parts and numbers connect and add up. 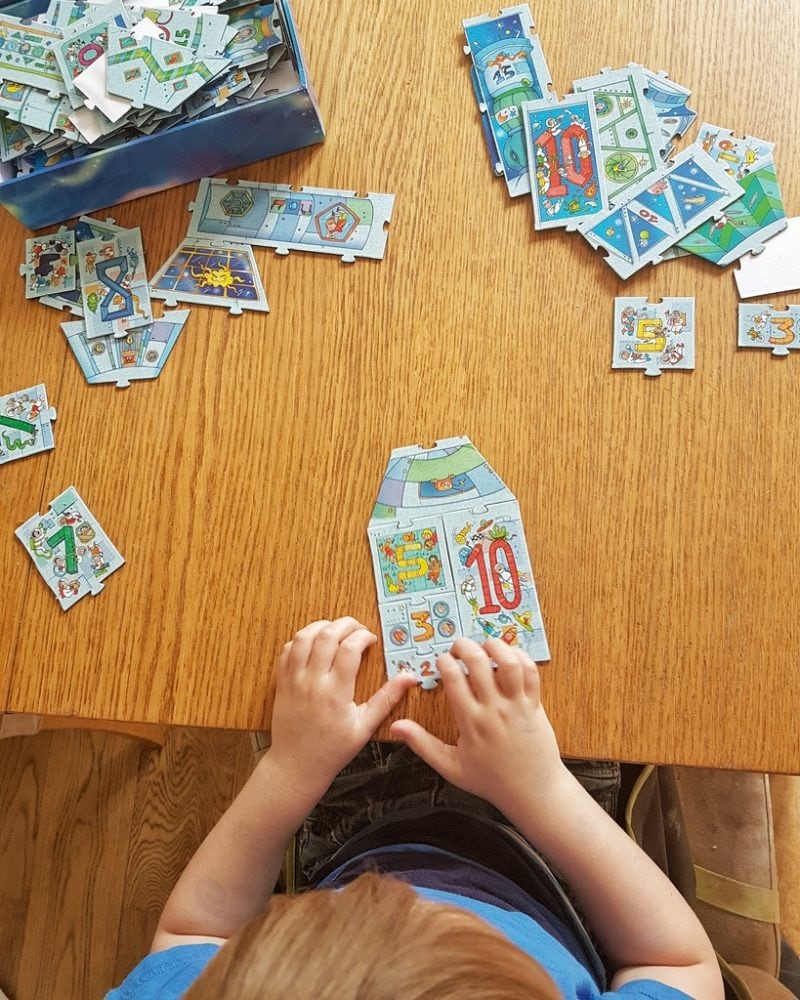 With this in mind, I think the puzzle has even more potential with slightly harder sums and slightly older children. It is already possible to make quite complicated sums and times tables by using the larger numbered puzzle pieces.

Verdict: The Elementary Maths Puzzle is a well-made and visually interesting educational game that has a lot of potential to capture children’s imaginations and improve their maths skills.

For more reviews, check out: 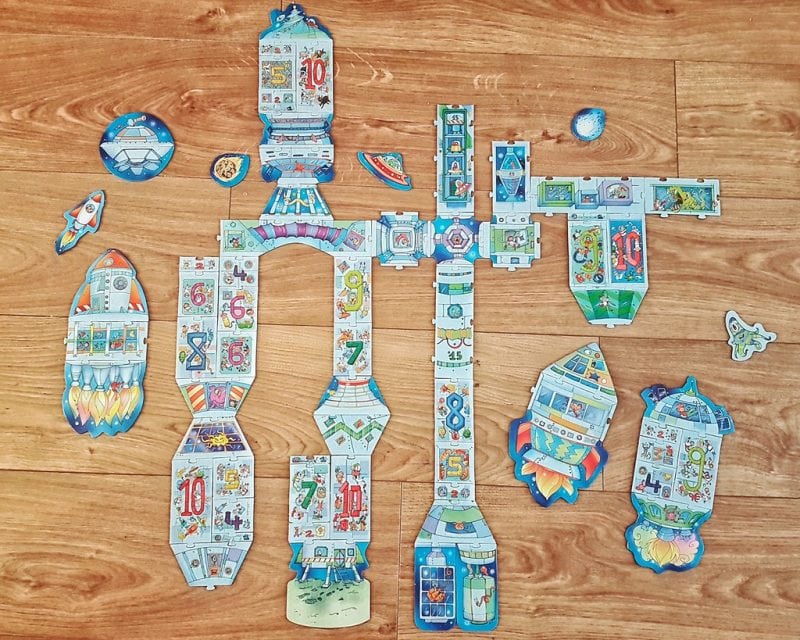 Disclaimer: I was gifted this puzzle by FunComet in exchange for this review. However, all opinions and words are my own.

#KCACOLS with A Moment With Franca