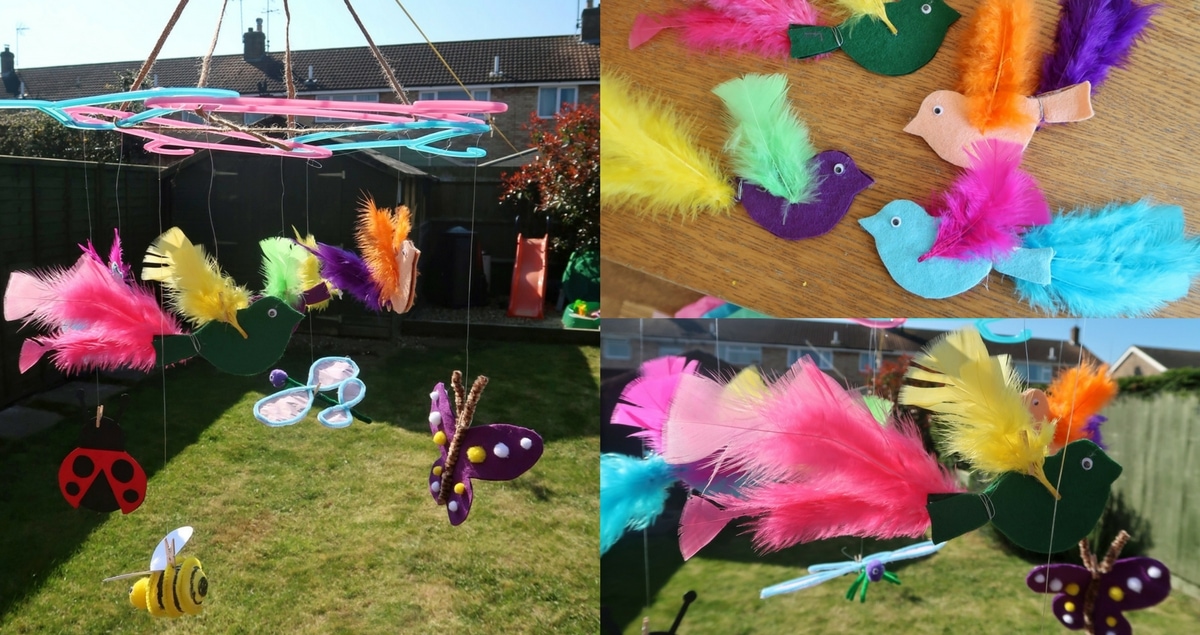 The theme for April’s Bostik Blogger challenge is flying, and so I decided to do some mobile craft. Although the decorations on this mobile are flying creatures, to fit with this month’s theme, I created the mobile to be changeable. The decorations are hung via tiny pegs, meaning you could use the mobile frame to display all kinds of things. You could choose a different theme for mobile craft, and add the new decorations, or you could use the frame to display other crafts and artwork. For example, the heart-shaped sun-catchers than we made for Valentine’s Crafts could easily be used to hang from this mobile.

The other great thing about this mobile craft is that you can get the children involved as much, or as little as you would like. 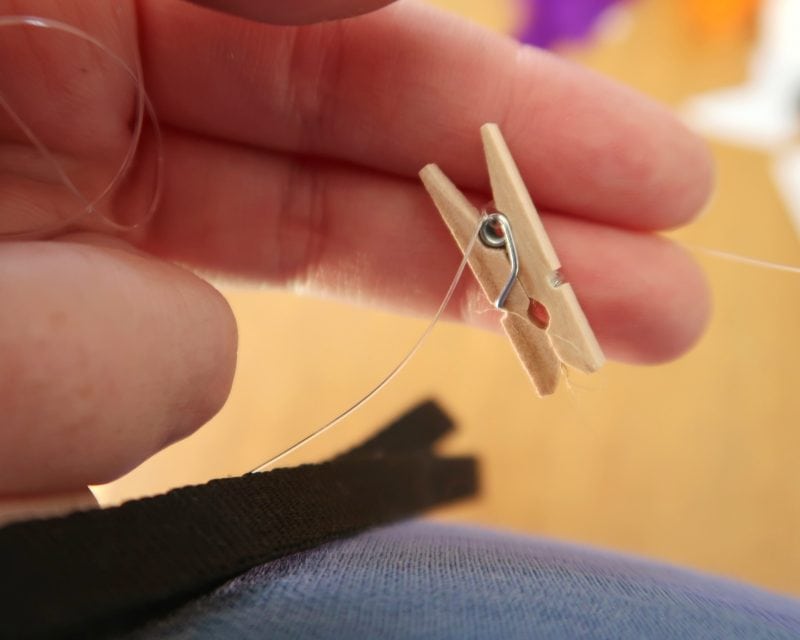 I will list the materials that I used but none of them are absolutely essential. You can use whatever materials you would like to create flying creatures. In fact, you could just use paper, card and glue. 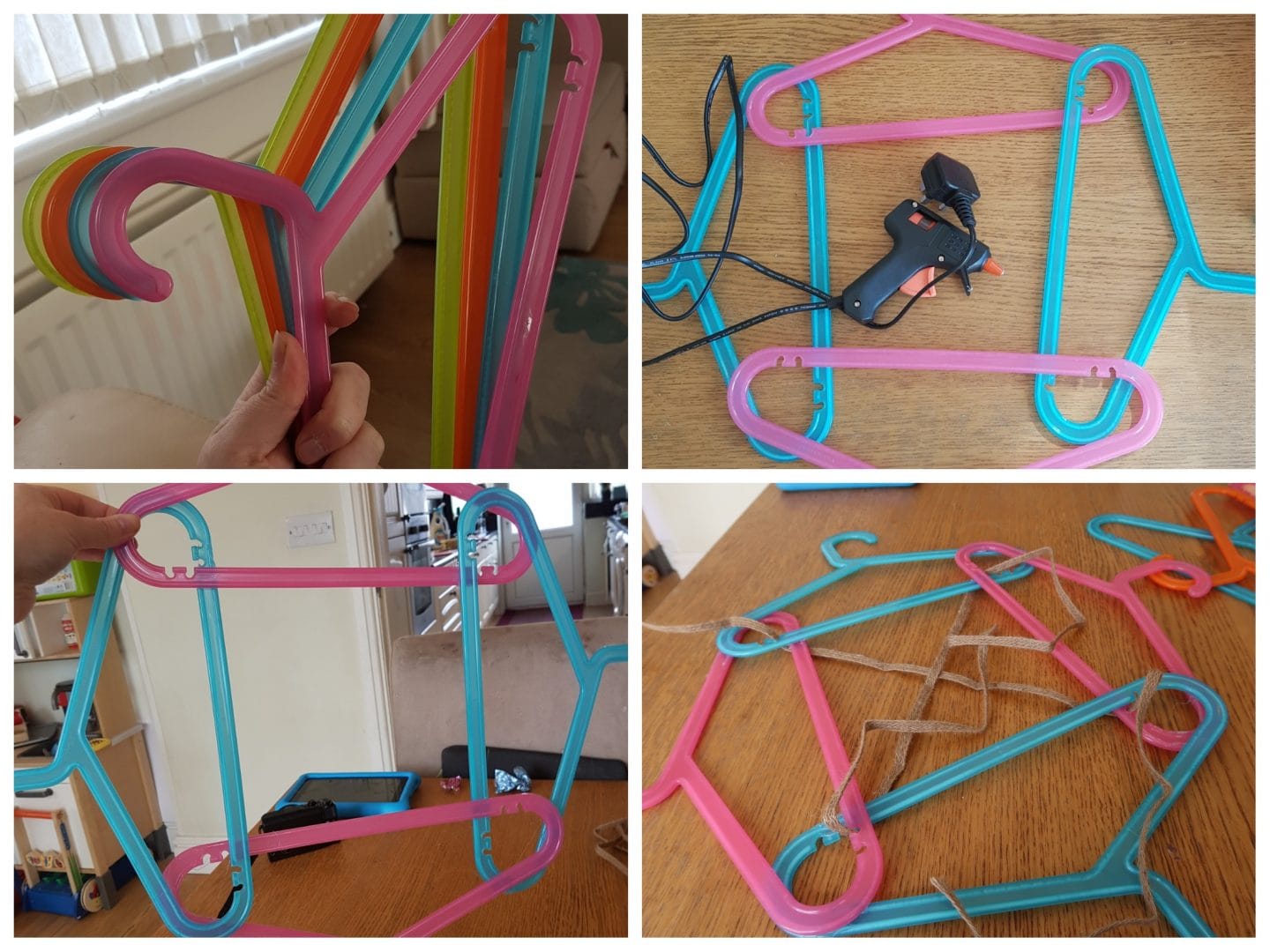 I used four colourful plastic hangers from Ikea to make my mobile frame. A glue gun is useful here but you could use superglue as long as you give it time to dry and fix properly. I then used string across the mid section, threading it at each corner of the middle square, so that the mobile can be hung (see above). 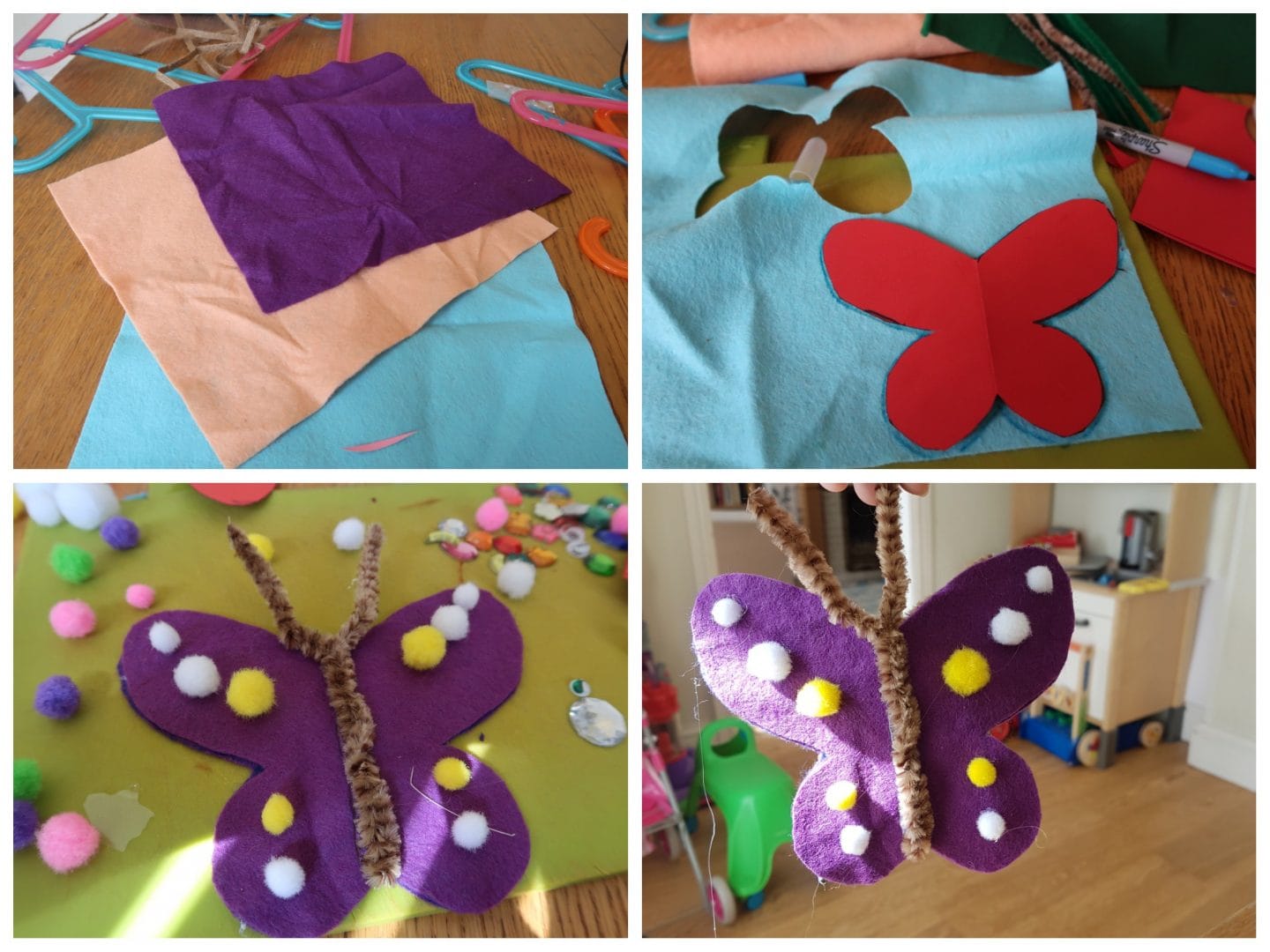 For the outside of the mobile I made a butterfly, a ladybird, a dragonfly and a bee. The ladybird is made solely from coloured card and the other insects were made with a combination of pipe-cleaners, pom poms, felt and card. I also used one polystyrene egg to create the shape of the bee. 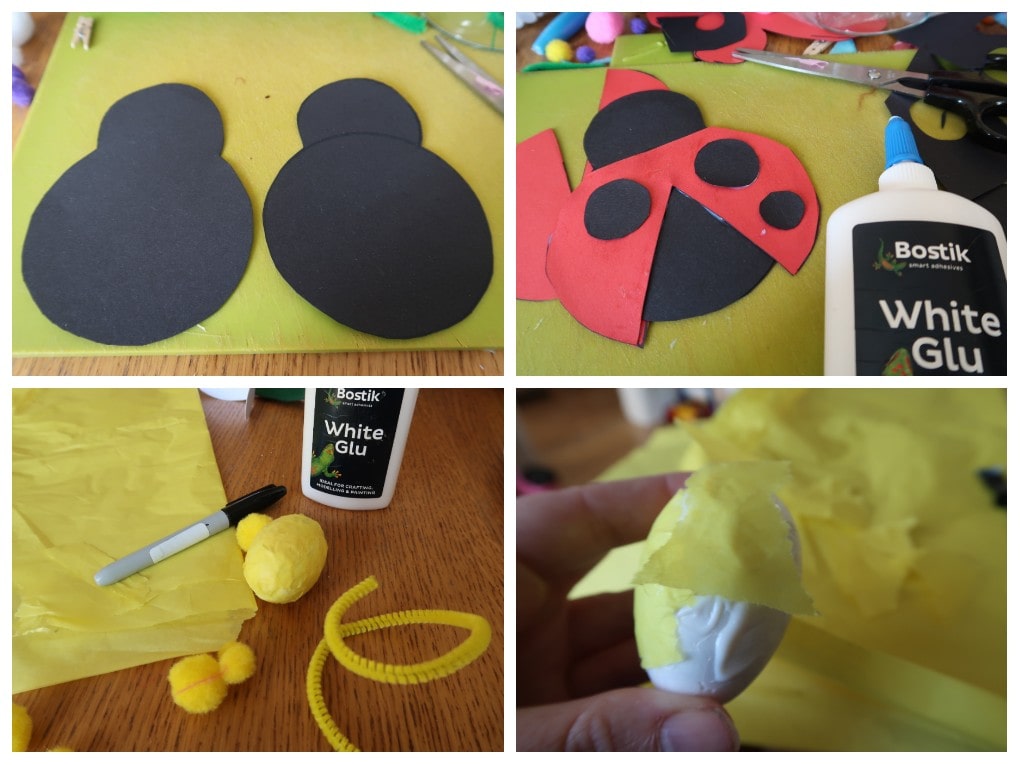 For the inner ring of the mobile, to hang from shorter threads, I made felt birds. I made a bird-shaped template (without wings) and cut out four, one for each corner. I then drew around the templates on felt and stuck the felt to both sides of the card. To make the birds’ tails and wings, I used coloured craft feathers. Finally, I stuck a googly eye on each side for each bird. 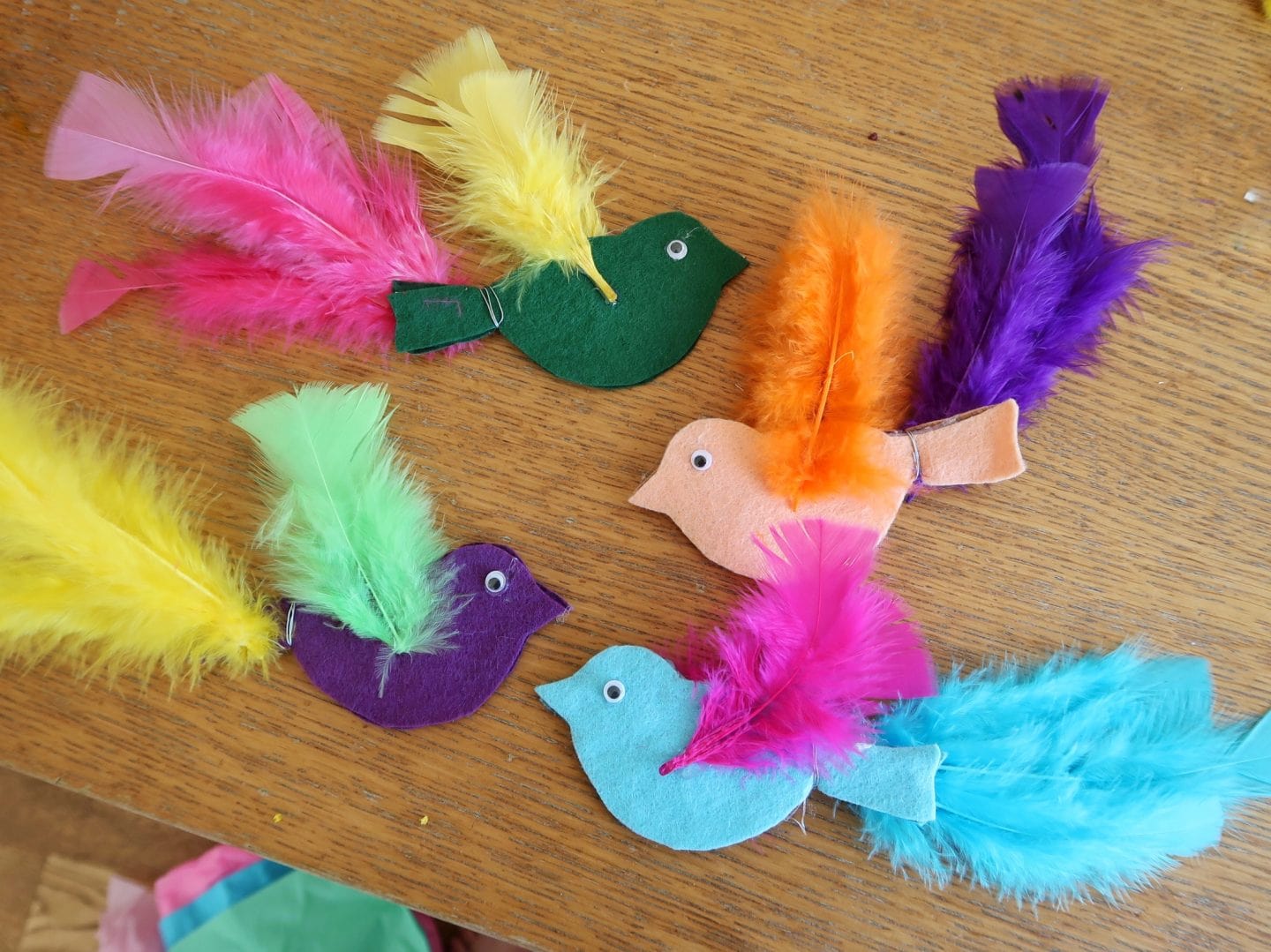 These birds look particularly effective and you could make all eight of the hanging decorations as birds if you wished. Once I had finished the hanging decorations, I attached plastic string of varying lengths to the inside and the outside of the four circles created by the intersections of the hangers on the frame. The birds on the inside section had slightly shorter strings, and the insects on the outer section had longer strings. I then tied the end of a tiny peg to the other end of the strings and attached each peg to a bird or insect. 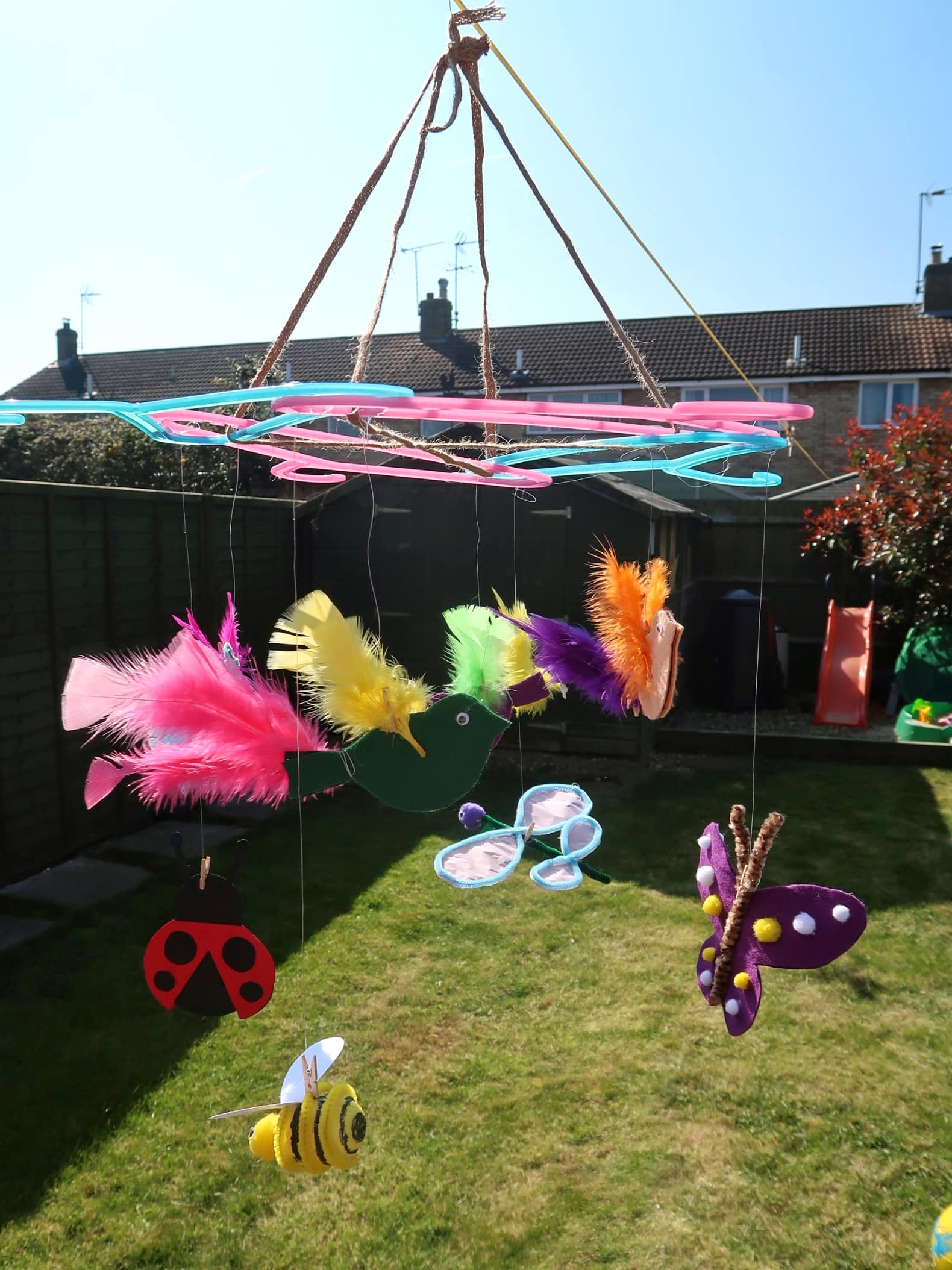 Finally, I hung the mobile outside. The children and I enjoyed playing with it and talking about all the different creatures. We talked about how all the creatures could fly, though some were birds and some were insects. Littlest had fun pretending to fly around the garden. 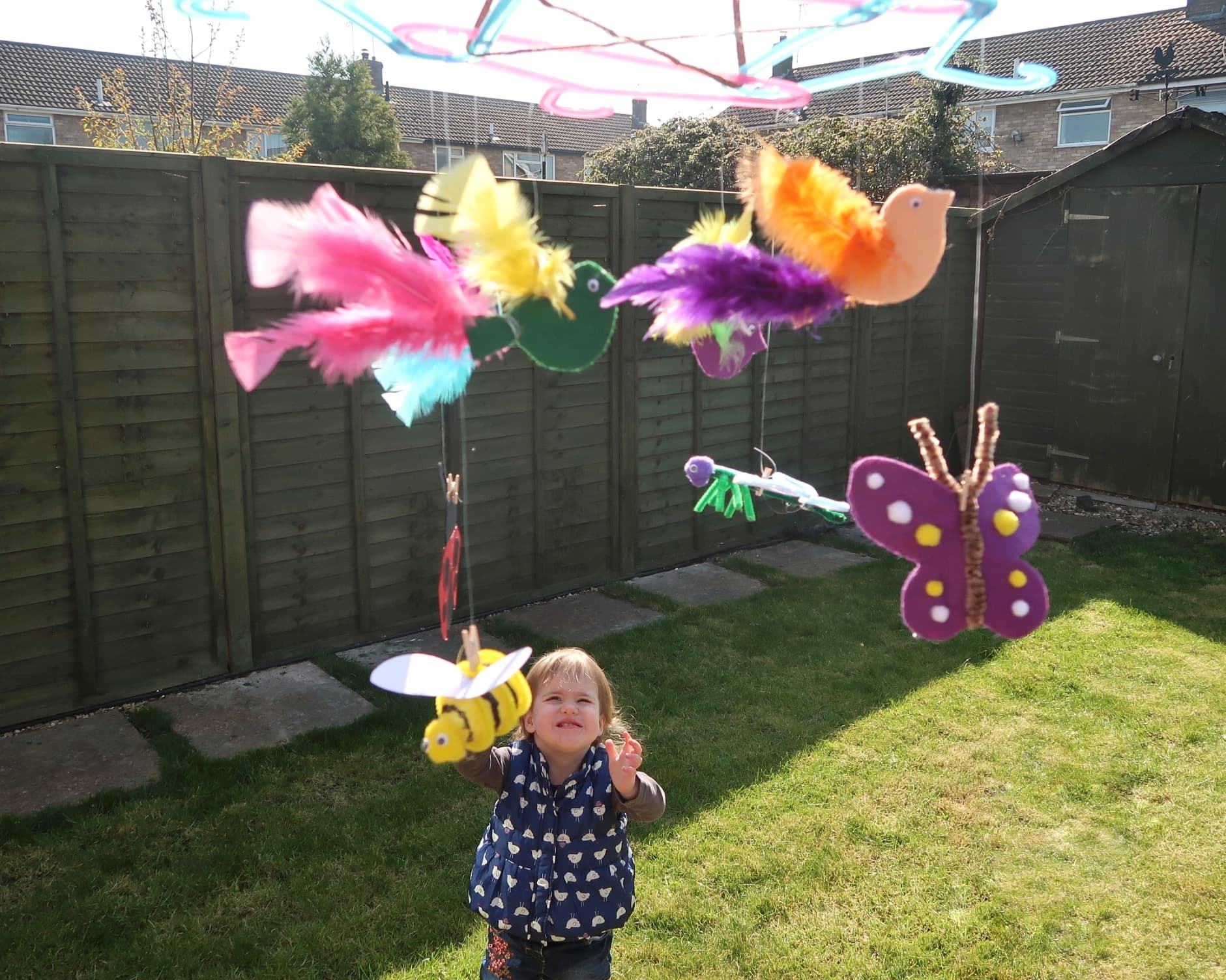 In addition, as the birds and insects are only attached to the mobile via the small pegs, you can easily swap all eight around or choose and craft entirely new things to hang from your mobile. For example, I may do some space crafting with the children in the next few weeks and we can make and hang rockets, planets, moons and comets from the frame. Hopefully, this mean we well get a lot of use out of our changeable mobile frame in the coming months.