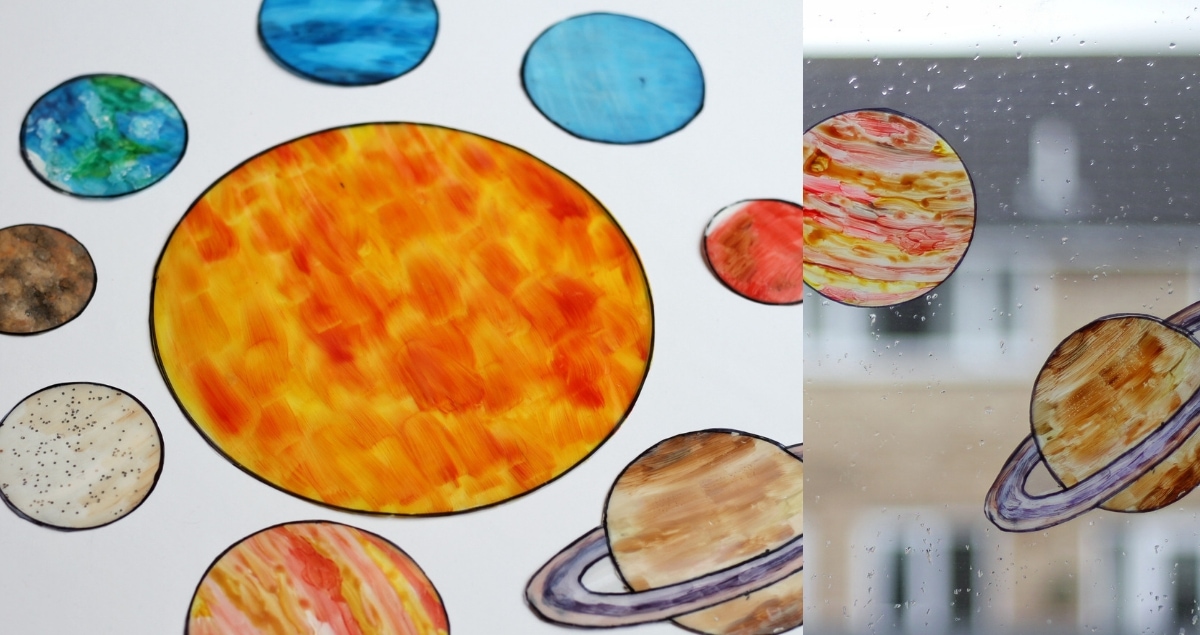 We are always pretty excited when the space theme comes around for Bostik Bloggers. Biggest’s main special interest is space and the solar system. He loves learning about it and any toys, books or items associated with space, especially if they have a sensory element. I love making space-related crafts for him because I know how much excitement and pleasure he gets from them. This month, I have made a set of solar system sun-catchers. These will be placed in Biggest’s bedroom, where he has a very large and long window – the perfect place for a sun-catcher solar system. 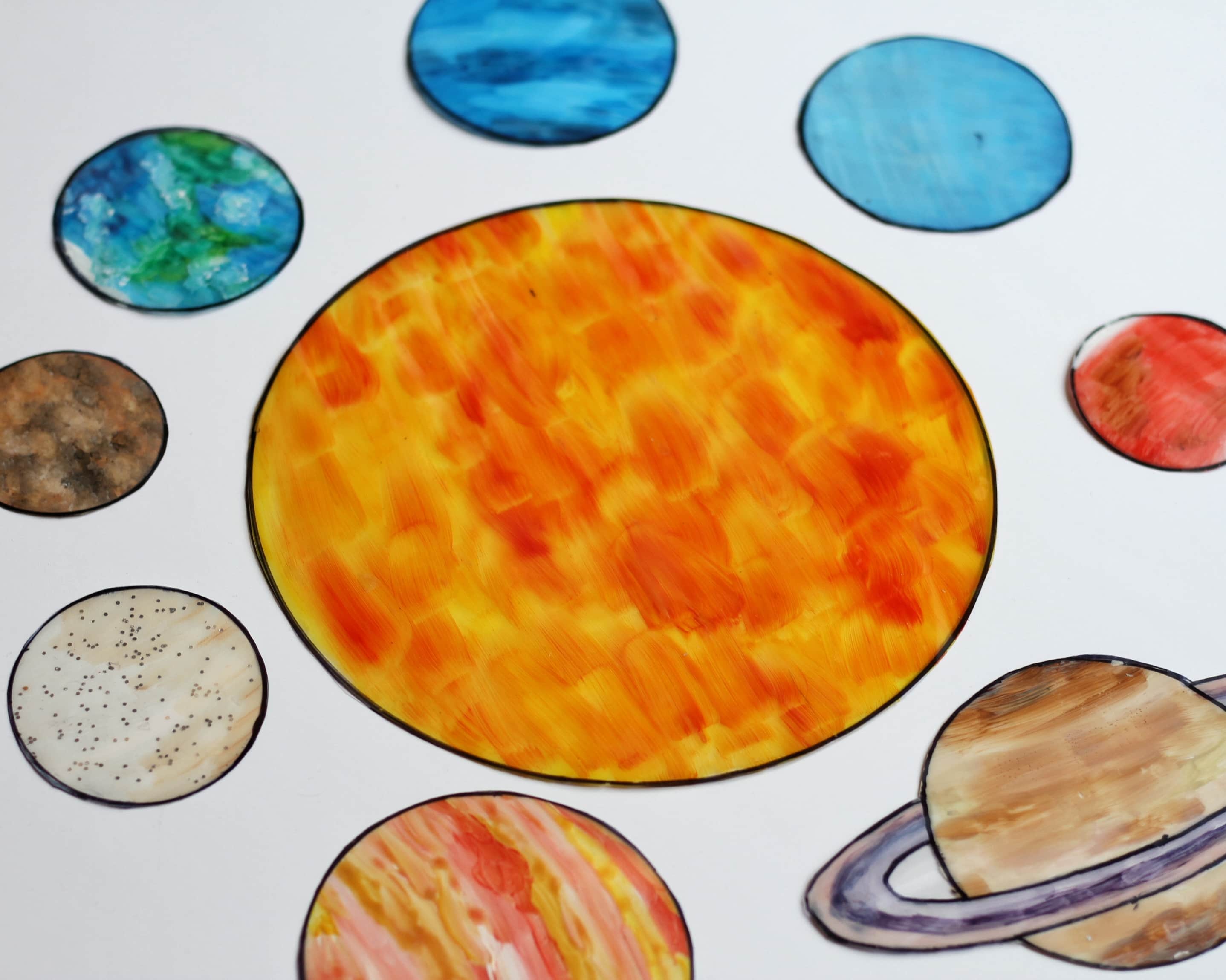 Firstly, you need to prepare some plastic. You may be able to buy clear plastic sheets from a craft shop. Alternatively, you can use laminator pouches which are laminated without anything inside. This is what I did! Once you have enough plastic sheets (I used 5 A4 size sheets), you then need to cut out 9 pairs of circles. Using a Sharpie or permanent marker, draw a pair of circles for the Sun and each of the 8 planets. I used various cookie cutters for the different sizes of planets and a small plate for the sun. 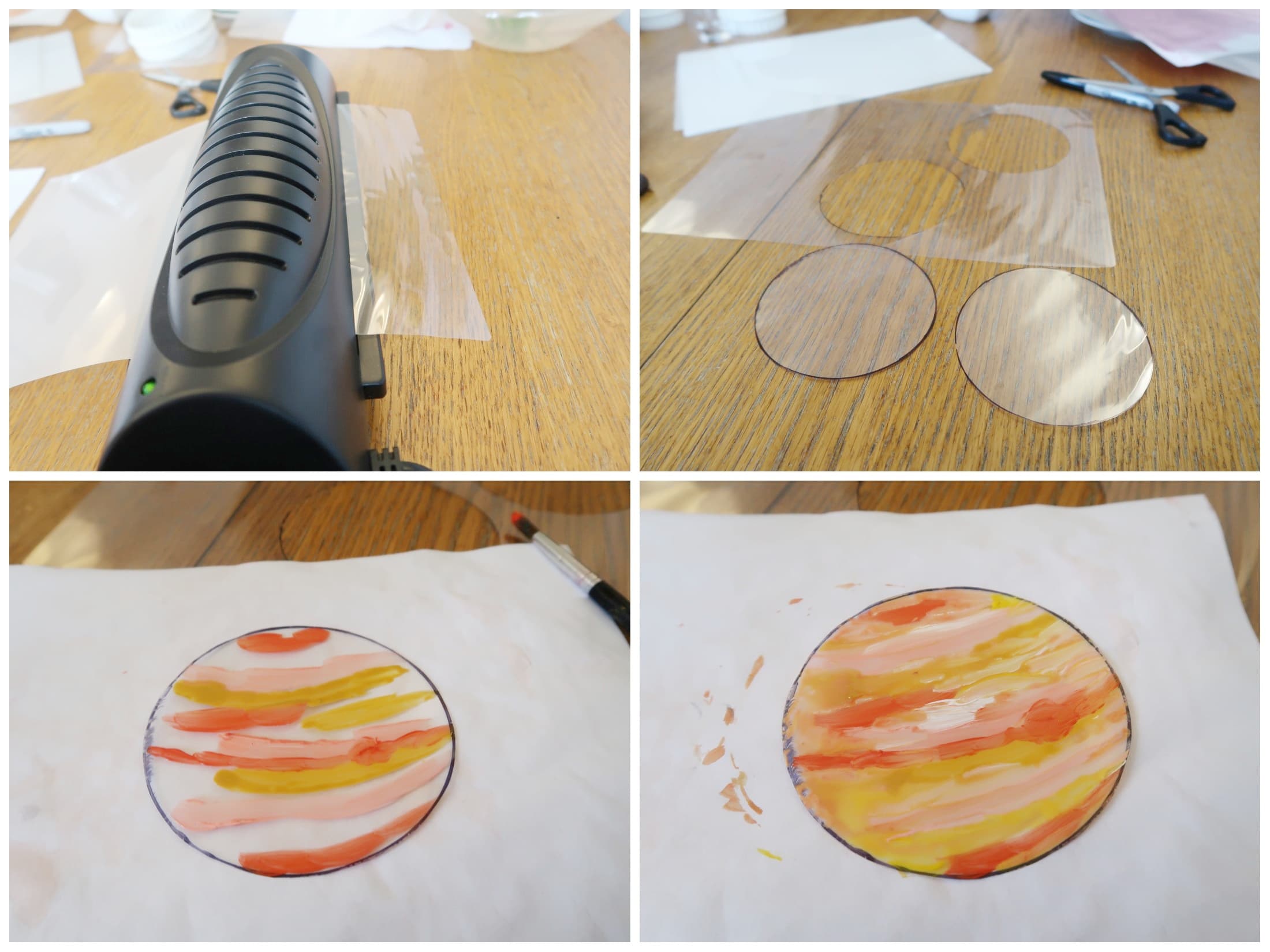 Once I had a pair of circles for each sun-catcher, I painted one of each to resemble the planets. Above, you can see Jupiter. This was made with a large cookie cutter and used orange, red, pink and pale brown stripes. I also included the famous ‘red spot’. I used acrylic paints to create each planet, using red for Mars and white and grey for Venus. As it is the brightest planet because of its dense, reflective atmosphere, I sprinkled a little silver glitter onto Venus. Make sure the paint is not too watery, as it will not cover the circle enough.

For Saturn, I used a template that I printed from Google. I made sure it was the right size (slightly smaller than Jupiter but bigger than the other planets) and drew around the template onto the plastic. 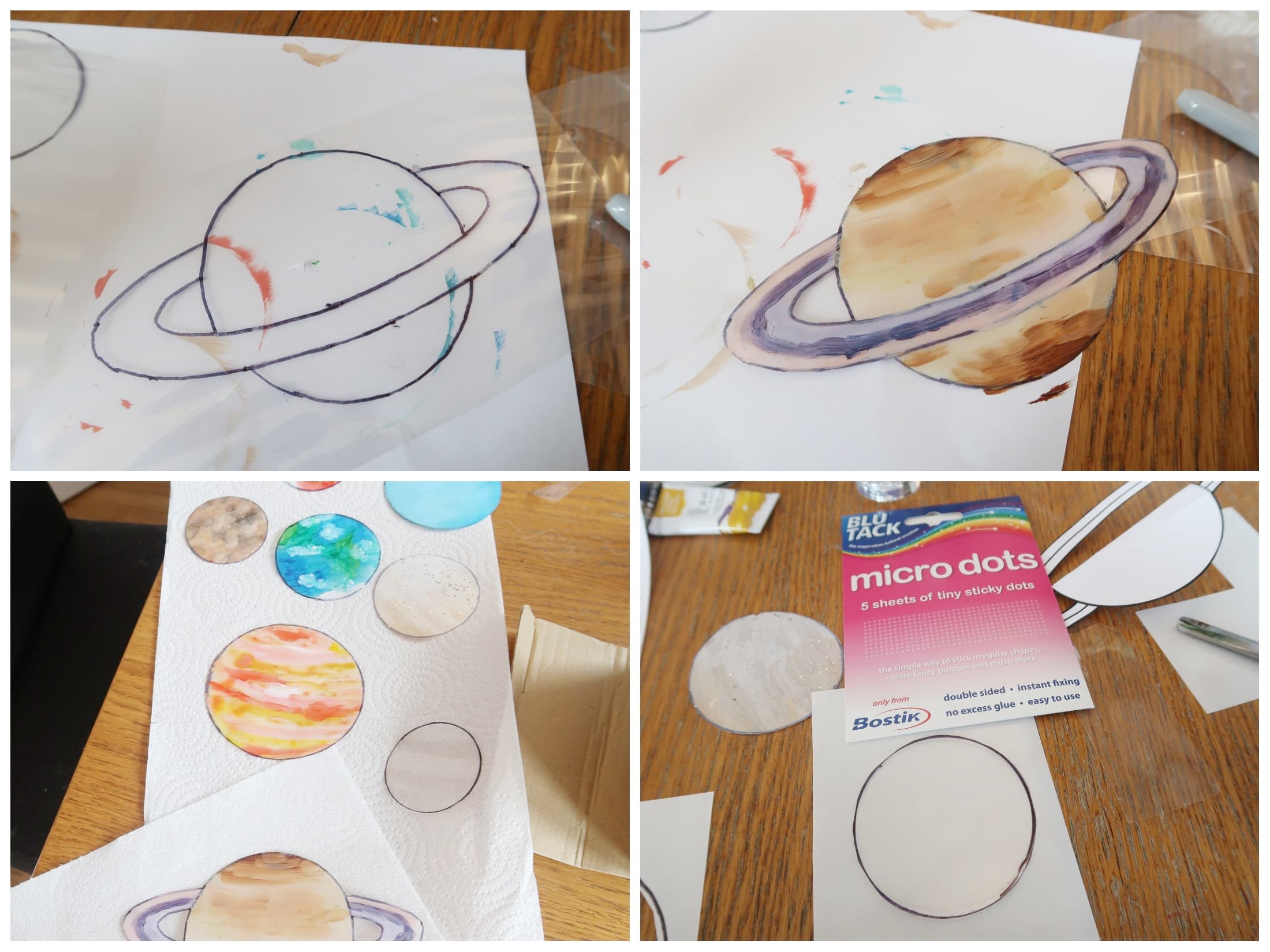 Before sticking the two sides of the solar system sun-catchers together, the paint must be completely dry. I used Bostik Blu Tack Micro Dots, as they are double-sided and can be cut to size, meaning they stuck the two pieces of plastic together perfectly but the glue remains invisible. They have a paper side to peel off and then a clear side to peel off once attached to one surface.

I cut the Micro Dot sheets to size – slightly smaller circles than each planet – and attached to the non-painted circles of plastic. For the sun I used several Micro dots sheets. It is quite important to attach them it on the clear circle. If you attach to the painted side, it removes some paint when you pull off the other layer to reveal the glue.

Next, I stuck the clear plastic circles over the painted ones, matching each circle perfectly so that they look like one piece with the paint in the middle.

Once they are stuck together, the light should shine through them to give the effect below. 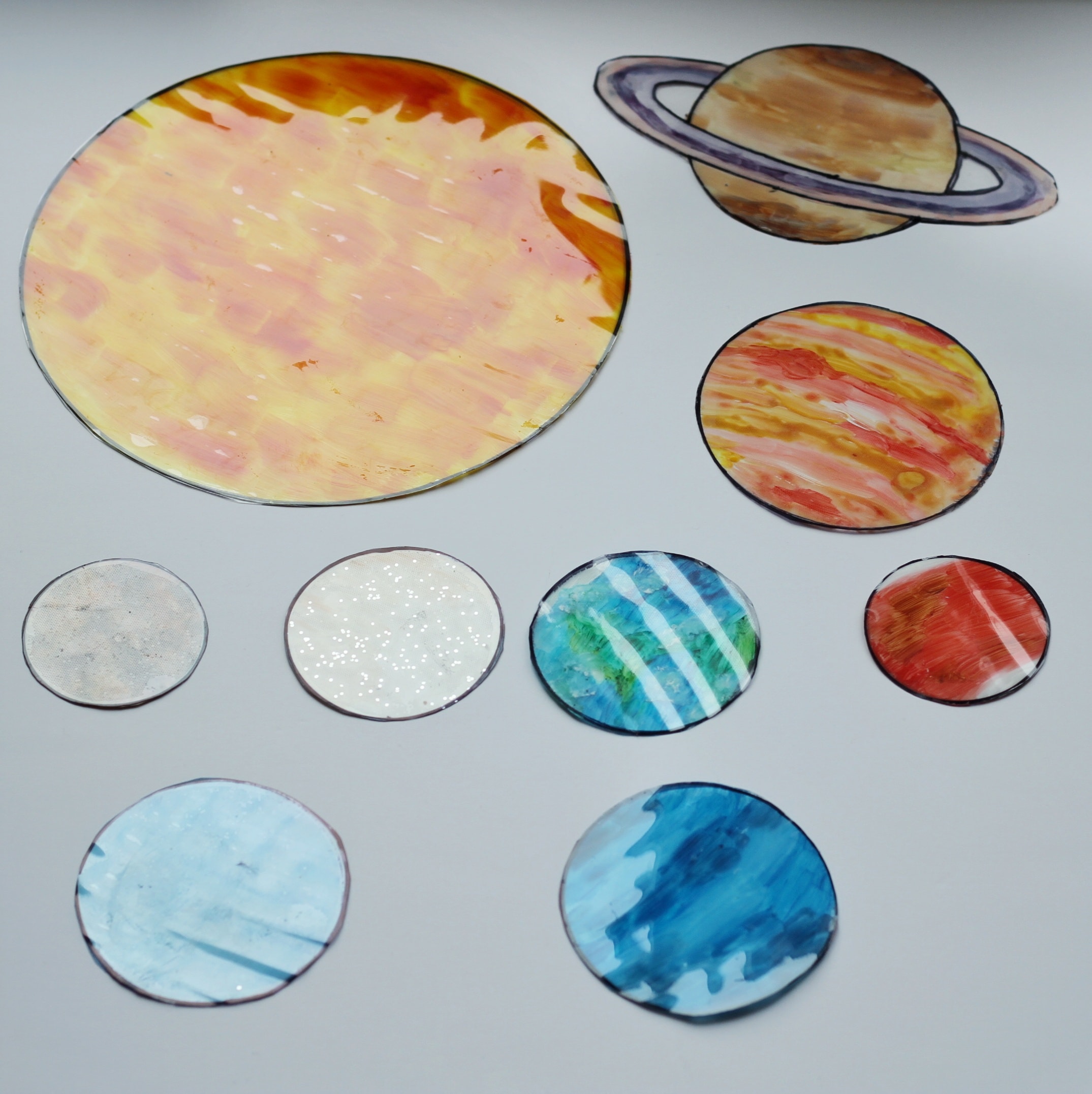 The sun-catchers are then ready to be put up on a window of your choice. We puts ours up in solar system order on Biggest’s window. To stick them to the glass, firstly make sure that the surface is clean and dry. I used glue dots to stick ours up, as they stick well but come off easily. You could also use Blu Tack, though this would show through the partially transparent circles. They look very effective with the light shining through, even on a rainy day. They also create colourful shadows on walls. My son was thrilled by them. 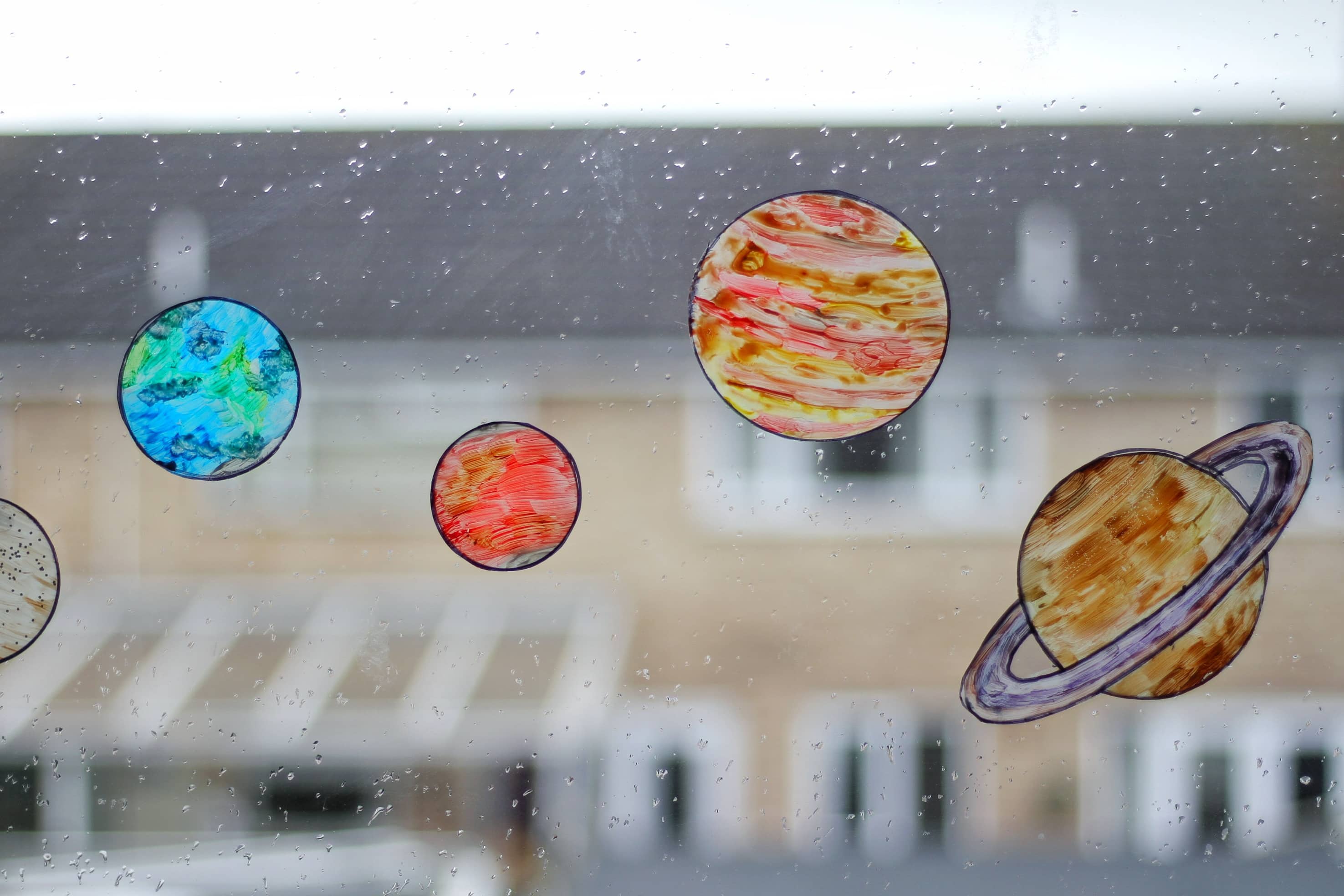 I chose to make these sun-catchers look like realistic planets, and so I painted them myself. However, you could do this activity with children and just make general planets, using different sizes and colours. I think you could also adapt this craft for other interests – sports balls or flower shapes could work well!

If you enjoyed this craft, you may also like:

Please note, Bostik send us a range of craft products each month in order to complete the craft challenge. This post contains affliliate links, which means if you click through and buy anything, we earn a small comission at no cost to you. For more information see our Disclosure Policy.