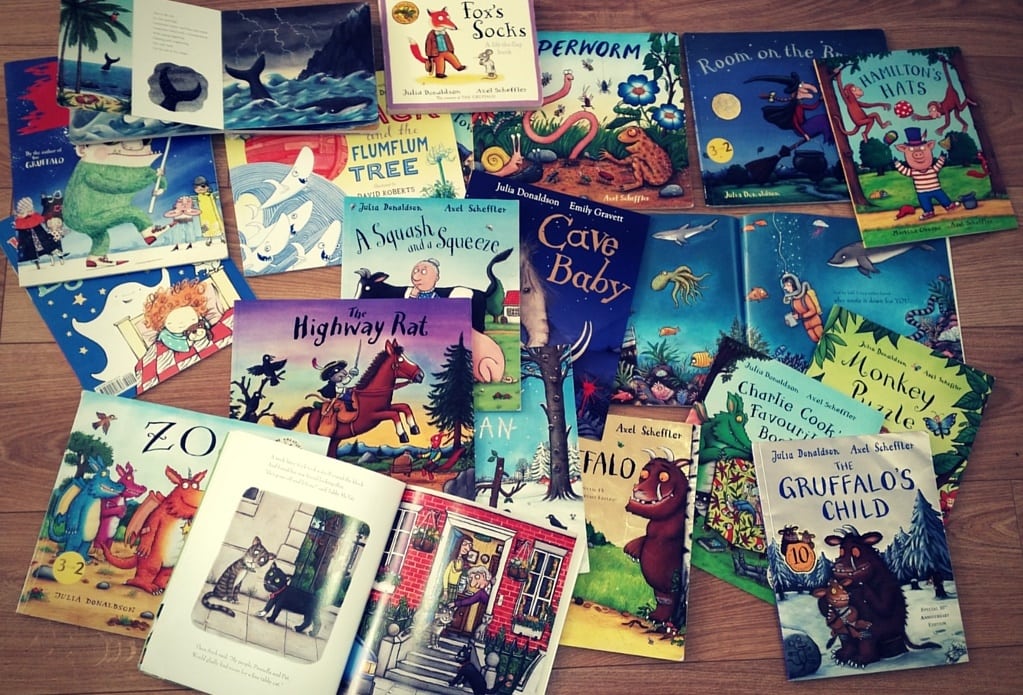 Chances are, if you have had small children in the last ten years, you will have heard of Julia Donaldson. Her books, most famously ‘The Gruffalo’, have entertained both parents and children alike for nearly twenty years now. And for good reason. The stories are engaging, the illustrations, with several collaborators, are colourful and captivating, and the rhymes perfectly phrased and fun to read aloud.

I genuinely enjoy reading Julia Donaldson and here are some reasons why I think she should be a part of every preteen’s book shelf:

1. Some of the writing, especially the poetry, is truly brilliant.

It’s about more than just the universally appealing stories. Donaldson is able to capture ideas and reference themes from great works of literature – in a way even small children can appreciate.

Take my absolute favourite, ‘The Snail and the Whale’. As well as having a clear and imaginative moral, like most of her stories – even the smallest creature can make a difference, if they believe in themselves and don’t blindly follow the crowd  – it also deals with the meaty literary concept of the sublime within nature, a favourite of Romantic poets such Wordsworth and Coleridge.

The opening reminds me of a text I study with A-level students – ‘The Rime of the Ancient Mariner’. Like the snail, the mariner undertakes a perilous sea journey that leads him to experience the extremes of nature in its beauty and terror:

And now there came both mist and snow,
And it grew wondrous cold:
And ice, mast-high, came floating by,
As green as emerald.
And through the drifts the snowy clifts
Did send a dismal sheen:
Nor shapes of men nor beasts we ken—
The ice was all between.
The ice was here, the ice was there,
The ice was all around:
It cracked and growled, and roared and howled,
Like noises in a swound!

The lines in ‘The Snail and the Whale’ are remarkably similar, and certainly capture the same sense of awe and wonder. The snail sails on the “wild and free” sea, encounters “towering icebergs” and terrifying “thunderstorms”. 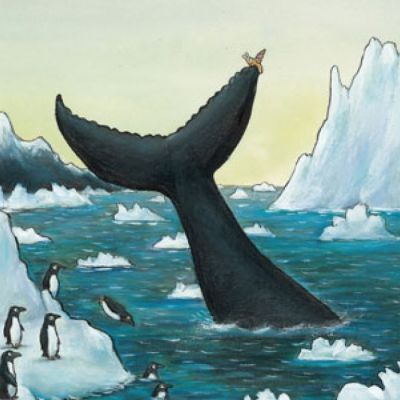 She comes to the same conclusion too, essentially, as The Mariner does: when confronted with the sublime face of nature – the terrible and the marvellous, the terrifying and the tranquil – she is both humbled and awed by her place within it all –

And she gazed at the sky, the sea, the land,

She gazed and gazed, amazed by it all,

And she said to the whale, “I feel so small.”

Granted, three year olds are not going to be making mental comparisons to Coleridge when reading. But I genuinely believe that ‘The Snail and The Whale’ can inspire a sense of how truly amazing the universe is, even in the youngest of readers.

Zog’s Princess Pearl is a character who refuses to wear frilly dresses and prance about the palace. Instead she shows that no one has to conform to stereotypes, or the expectations others force on them, and becomes a doctor.

The Smartest Giant in Town is so kind that he gives up the very clothes on his back to help those in dire need.

Tabby McTat’s new owners, Prunella and Pat, regardless of whether they were definitely intended to be a same-sex couple or not, reinforce and subtly normalise the idea that a family can come in any shape and size.

These are all messages we should want our children to hear.

3. The stories are aimed at children who may not be able to read yet, and, as a result, they are designed to be read out loud.

The rhythms and rhyme schemes are often dynamic. I appreciate that this can be a little daunting to some parents at first. ‘Tiddler’ and ‘The Highway Rat’ (based on the epic narrative poem ‘The Highwayman’ by Alfred Noyes) are examples of works that are slightly tricky but thrilling to read out loud.

The repetition and unusual metre in both ‘The Highwayman’ and ‘The Highway Rat’ capture the sinister galloping hooves as both protagonists advance towards their goals.

Tiddler’s ‘tall tales’ and wild stories are told with a rap-like rhythm and alliteration that enhance the colourful nature of his imagination and his adventures.

I really enjoy putting drama into the performance of a story and both my son and my daughter love it when we read to them. There is no shame in practising a new book in front of the mirror a few times before you go for the big bedtime performance in front of the children!

4. There is a true emotional honesty and intensity associated with so many of her stories and characters.

I am not ashamed to admit, I have been close to tears when reading ‘Stick Man’ – alone in the snow, so far from his family, not having seen them for so long; it seems like he might give up. The first time I read I willed him to get up, to keep going, to find his family.

When the snail realises the whale is in dire peril, her despair that she may not be able to help him is palpable.

Likewise, when we hear of how the tiny snail, “so small and frail” saves the life of her massive friend, it is hard to stop a cheer of triumph escaping.

We care about these characters. They are succinctly and perfectly created within the space of just a few lines. They convey complex emotions so simply and they teach our children about the most important of human experiences, both difficult and rewarding.

5. Lastly, if you are a true aficionado of Donaldson’s work, specifically her collaborations with the illustrator Axel Scheffler, then searching for the illusive Gruffalos in their body of work since the publication of ‘The Gruffalo’ can be a hugely fun task to share with children. 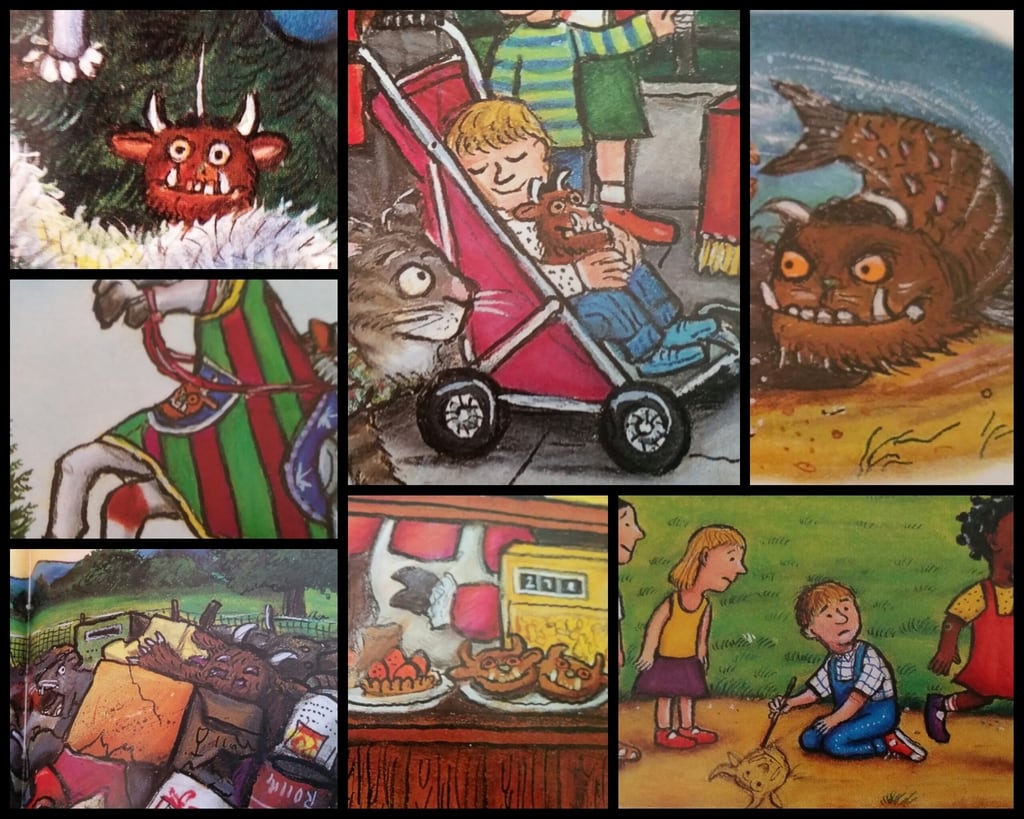 I have included a few of the Gruffalos we have found together above, but I will not spoil the thrill of the chase by revealing where they are. We have spent some happy times searching for them together in our household.

So, if you haven’t shared Julia Donaldson with your small children yet, particularly some of the lesser known ones which I believe are actually superior to ‘The Gruffalo’, then go out and buy one. I’d start with’The Snail and the Whale’. 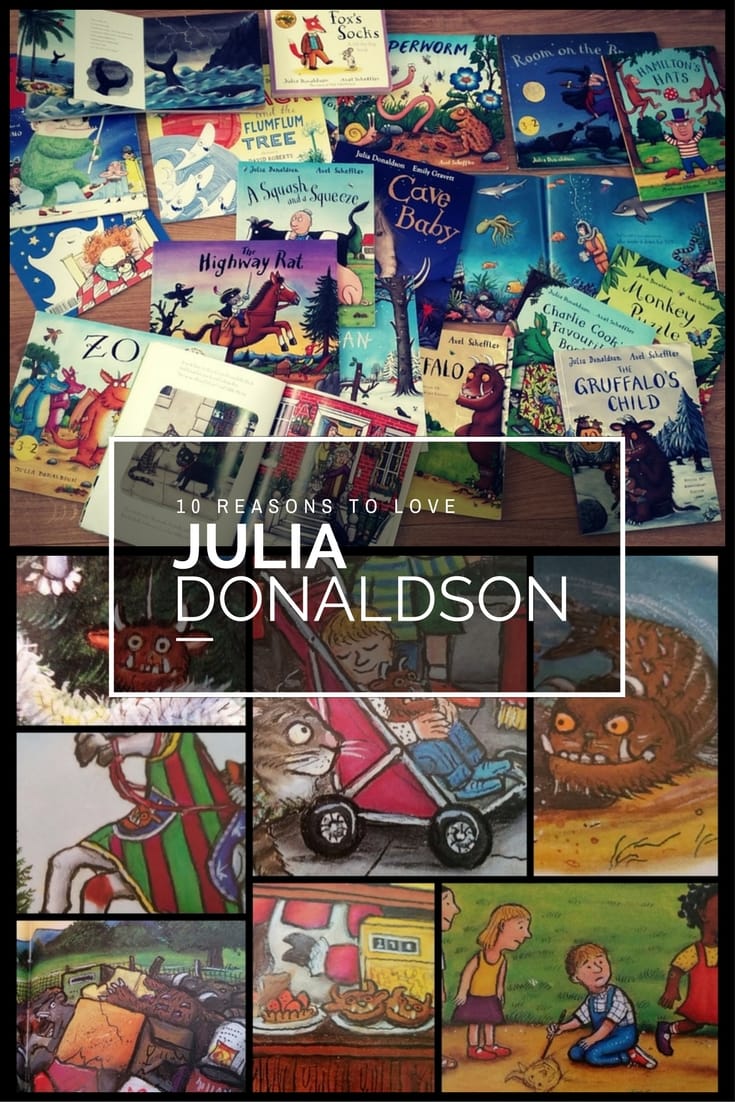