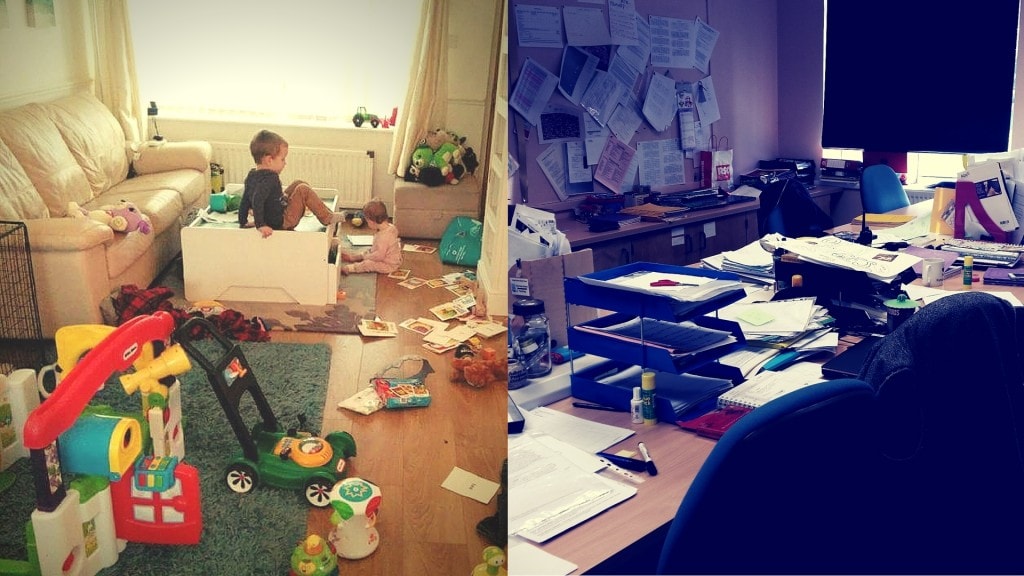 I was recently invited to take part in two separate days of no complaints and positivity with Cuddle Fairy. You can read about her day, and posts from the other lovely people who took part here.

These days fell at particularly interesting times for me; they corresponded with the two things that take up all of my time: motherhood and teaching.

One of my #nocomplaints days took place while I was at work, as an English teacher, in a busy Birmingham comprehensive school. The other happened over fifty miles away in leafy Gloucestershire, where I spent the day, mostly indoors, with my three year-old son and one year-old daughter.

Being a parent and being a teacher are diverse and difficult roles. Anyone who has done either will be quick to bore you with an extended narrative featuring the challenges they face.  In fact, both parents and teachers have suffered a fair amount of negative press relating to the amount of complaining done by each. We are ‘martyrs’ and, according to Sir Michael Wilshaw and the Daily Mail, too privileged to know what stress is: 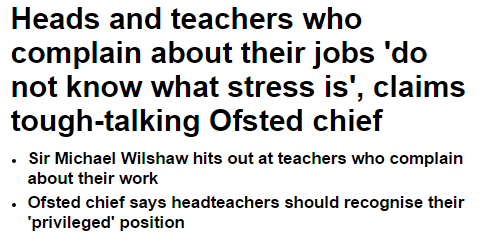 On the parenting front there is also this viral facebook comment from an anonymous mother. It received quite a bit of backlash itself. I have chosen to include The Unmumsy Mum’s annotated version: 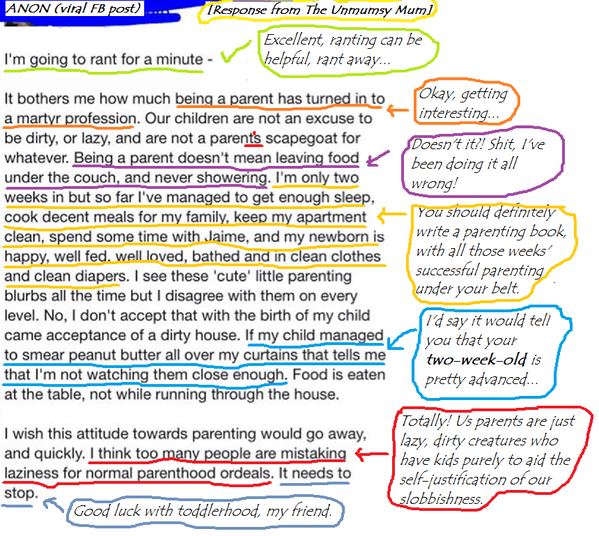 Despite Wilshaw’s wilfully outrageous claims and the unwitting naivety of the anonymous mother, we could all probably complain less.

Yet we are human – all of us – with our safe beds, warm clothes and food on the table. I am aware that even my very worst days are someone else’s best; I am also aware that we are all fighting something and to complain is a form of release. So I went into this challenge with those thoughts in mind. Does complaining too much make us more unhappy, give us more negative thoughts? Or is it a necessary release to help us cope with the struggles we all face, privileged or not?

And so back to my days…

Both days provided me with ample challenges to overcome in terms of avoiding complaint. I broke two of my toes the day before the teaching one started and, a week later, I still couldn’t wear a shoe on one foot ready for the stay-at-home day. The children (both pupils and offspring) enjoyed that no end: 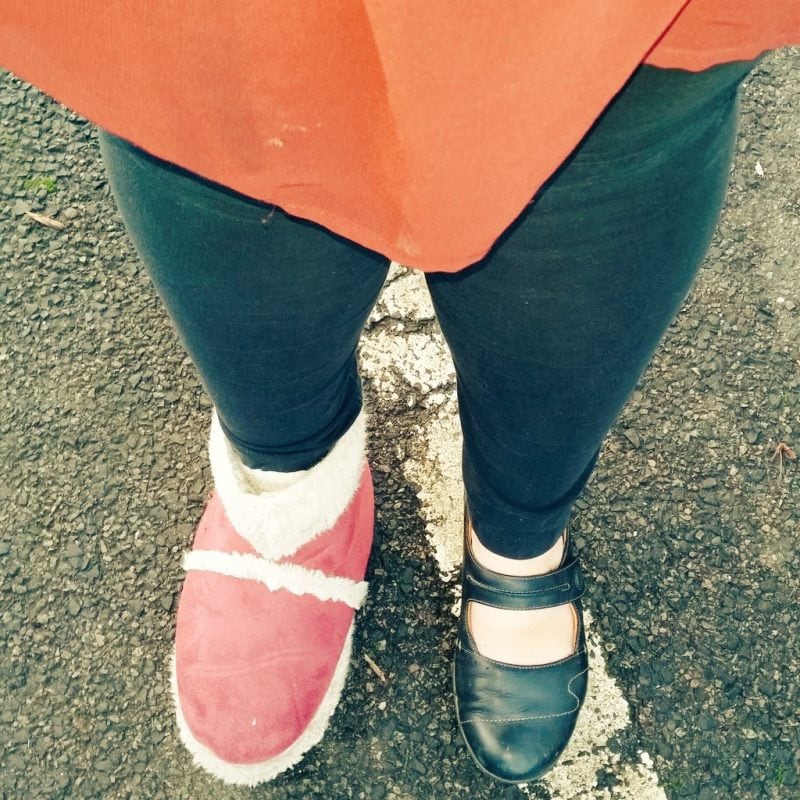 The teaching day was beset by: a 4am start (thanks to the snotty baby); a long commute made longer by traffic; meetings; discussions of new monitoring and feedback plans; reprimanding homeworkless students; and hobbling between classrooms while Year 11s looked at my fashion-statement foot disdainfully.

My mummy day involved: more hobbling; breakfast tantrums, a blood test to monitor my pre-diabetes at the GP (with children in tow); nap-refusal; one vomiting incident; one act of toddler violence with a remote control; and cooking a nutritious lunch for two which was then resolutely not eaten.

I could go into a lot more detail about the ups and downs… but you get the gist.

My conclusions at the end of the two separate days were quite surprising. Complaining is almost an endemic part of teaching; from the moment I stepped into the staff room I felt huge pressure to expel any negative feelings I had about any part of my day. These pressures were both external and internal. There is certainly an expectation, almost akin to peer-pressure, that you will complain when conversing with other teachers for any length of time. In addition to this, I found that simply trying to dismiss my negative reactions to problems before I gave voice to them didn’t work. I wanted to complain.

I wanted to join in with the camaraderie of lambasting Year 11, how they have gone off the rails and need to learn some respect and work ethic if they are ever going to achieve their target grades. It was cathartic.

My mummy day, on the other hand, was completely different. For a start, there was almost no social element to my day. The only adult I spoke to before my husband returned from work was the nurse who took my blood and that was the briefest of exchanges. My daughter cannot talk and my son’s main areas of conversation mostly relate to requesting snacks and considering the size, shape and purpose of his inordinate toy vehicle collection; there was no one to whom I could complain.

Of course, this didn’t stop me having negative thoughts. Particularly when, after a highly charged lunch, my toddler hit his baby sister over the head with the TV remote because she dared to touch the potty that he was refusing to use for the purpose it had been intended. But as soon as the negative thought came, I remembered I was being positive and it slipped away, still flimsy and insubstantial, before it had the chance to take over.

I genuinely think I had a calmer day because of it. I felt like a better parent. Of course, when my husband returned, I did relate the tale of the remote control incident, with some vigour and colour, but the bite was taken out of the negative emotions by then.

So what does it all mean? This challenge has led me to think much more philosophically about complaining and the role it plays, psychologically and socially, in my life. At first, I was unsure what it all meant – was it alright to complain as a teacher, but damaging as a parent? Was my perception that complaining could be ‘good’ in some circumstances simply a matter of this behaviour being ingrained in my teacher’s persona?

Complaining can be cathartic but it can be damaging too, leading us into a spiral of negativity that makes us feel worse than we need to. As with so much, context is key. Being aware of your own thoughts, your own feelings, how you choose to act on them and how they act on you is key.

In a way, my days of #nocomplaints have, ironically, taught me to appreciate complaining.

But they have also taught me to discard negativity and complaints when they seek to overwhelm me. 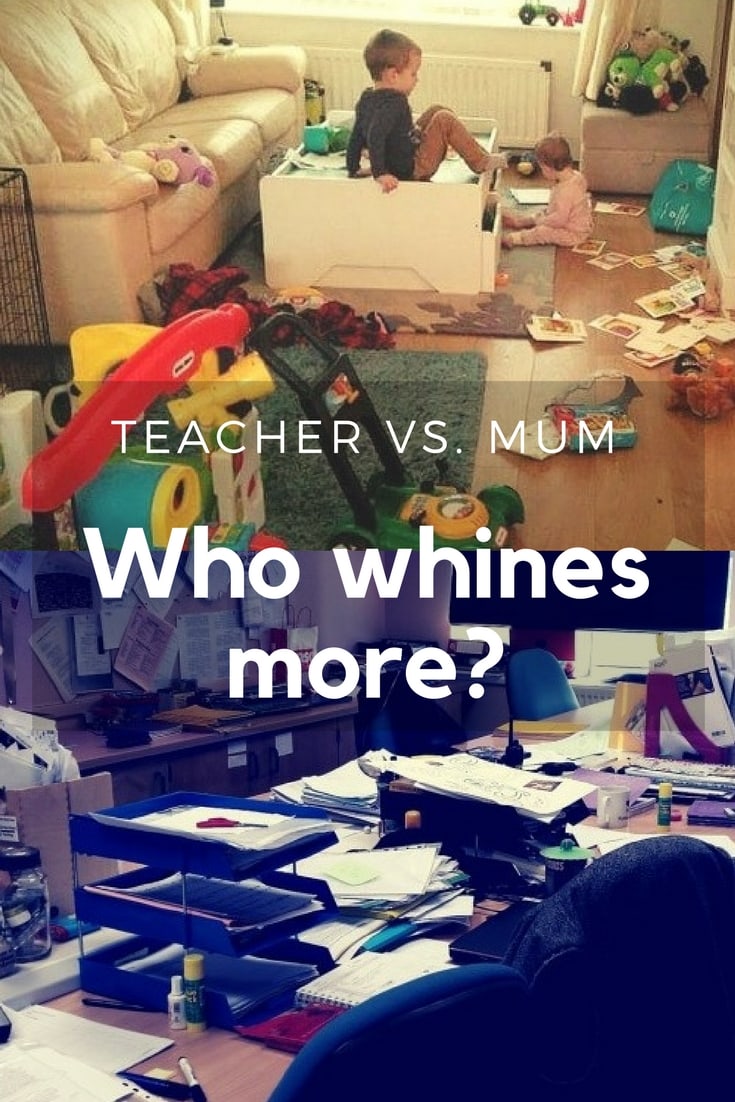 37 thoughts on “Teacher vs. Mum: Who Whines More?”