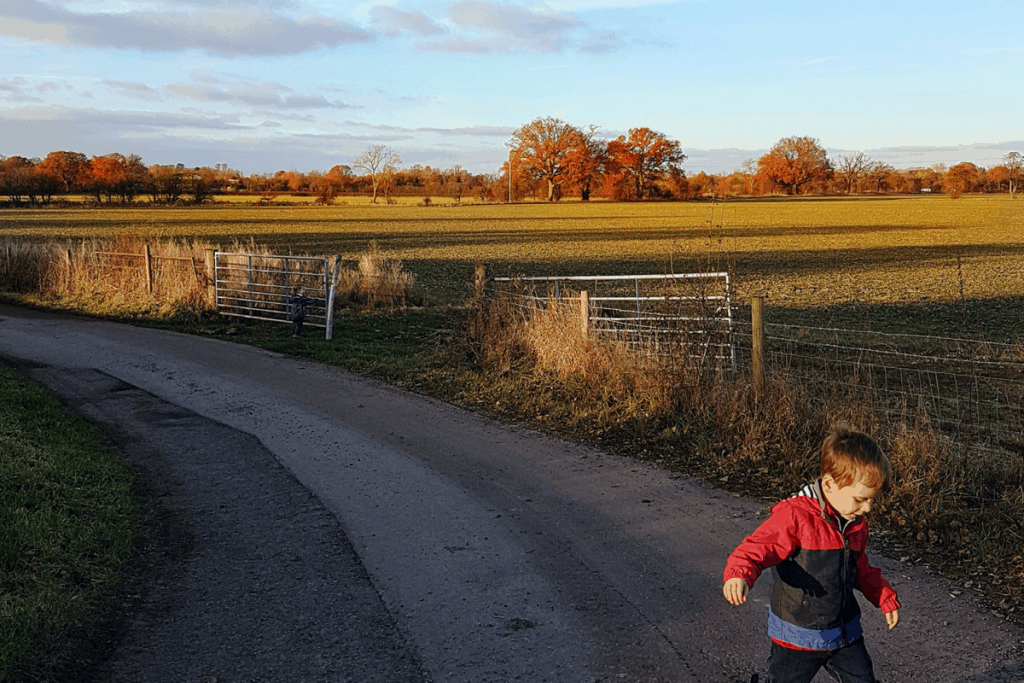 In the words of Bilbo Baggins, it’s a dangerous business, going out your door. If you have a child with autism, leaving the house can take on the epic highs and lows of a trip to Mordor.

When we began to appreciate Biggest’s difficulty with routine and rigidity, when we knew that it was something he wouldn’t grow out of, at least in the traditional way, we decided that we would do our best to still get out, to still do the things we knew he would find joy in, if only everything went to plan. But it is a decision that causes me constant worry, constant doubt.

Flip a coin for delight or despair. On excursions I thought he would love, he is overwhelmed with anxiety –

At the Westonbirt Christmas lights the crowds at the entrance disturbed him from the beginning and he sobbed until he could barely breath.

At the top of Broadway tower, the castle that so enthralled him on the pictures, the wind made him scream as if he was in pain.

At a beach by a lake, the touch of sand was unbearable, even though he will play for hours in sand at home.

Away for a night in a strange hotel, sleeping with all of us in a different room, he was calm, relaxed – a huge upheaval, without the slightest fuss.

On a different, windless day, at a different castle, he was curious and excited, exploring each echoing room and laughing gleefully as his own voice was reflected back at him.

When we nervously decided to go to the fireworks, despite the noise, the crowds, the dark – he was a whirlwind of delight. A slight wobble before his ear-defenders were secure was quickly forgotten, and he spun and flapped and danced, shouting out each colour as it exploded into the sky.

All too often, it is small, unpredictable things that spell disaster. The things I thought he would relish are disturbed by something I cannot control, by expectations that are not met in ways I can never see beforehand.

There is no way to know which tiny details he may fixate on.

At a wildlife centre, bales of hay tormented him. Other children climbed and leapt from them but he stood and screamed. They were too high up, they would fall, it was dangerous. He could not bring himself to look away, could not be persuaded or cajoled to leave. He had to be carried away, kicking and screaming, until he could forget the fear that consumed him.

At a farm, another boy insisting that a well was for wishing made him rage and howl. It was just like the drawing from a book at home – a picture of a well that was not used for wishing. The boy was wrong, wrong, wrong and none of the other sights – no animals or play parks or tractors – nothing could distract him from his rage.

We plan excessively. We show pictures. We explain. “First we will do this…. Then, next we will go here. There may be lots of people. This is what it looks like. Here is where we will have lunch…”

But it is never enough. We flip the coin, we run the gauntlet.

The doubt is always there. Is this wrong? Should we have brought him? Am I making it harder for him? Even worse, am I selfish? Are we enforcing the life we thought we would have, with no regard for what he needs?

I do not know.

On the dark days, when I can bring no comfort and he is lost in a storm that I cannot control, that I must wait to subside, the thought resounds in my head – would this be happening if we had not come? Would he be happy and calm?

Perhaps. But there are no guarantees at home either.

I hope that as he grows, as we all learn together, we will find a balance. For now, going out the door will always be a chance.

The world is indeed full of peril and in it there are many dark places. But still there is much that is fair. And though in all lands, love is now mingled with grief, it still grows, perhaps, the greater.

― J.R.R. Tolkien, The Fellowship of the Ring

18 thoughts on “To stay or go? When getting out means melting down.”